As CERF prepares for an important birthday celebration on 6 November 2011, the first day of the CERF 2011 conference in Daytona Beach, we third-decade CERF members thought a trip down memory lane with the CERF archives is in order—to remind ourselves of how far CERF has come and to preview what lies in store for our future. The following is the beginning of a series called, “Forty on Forty.” As the title suggests, these will be articles of 40 lines in length on the events of the past forty years. Our goal for the series is to inform, entertain and pay homage to the wisdom in informality that our CERF predecessors have fought to preserve.
Bring Your Birthday Suit???
The saying goes: there are no new ideas. A review of the C/ERF news archives suggests that this saying also applies to environmental issues facing coastal and estuarine systems. In 1974, just three short years after ERF formed, the newsletter that went out to the 1,200 ERF members was a simple, bi-folded sheet of thin white paper. It lacked embellishment, illustration or color.

There were no traces of the beaming photos of estuarine professionals in action that we are now accustomed to, and the CERF logo was little more than a line drawing. The single article, written by ERF’s second President, Perry Jeffries (1973–1975), detailed all of the day’s news, including the oft-asked question heard at the Second International Symposium on Estuaries:
“What is this Estuarine Research Federation, anyhow?” The characteristic lack of self-importance shared by so many C/ERF Presidents of the past four decades shone through in the article when Jeffries concluded, “who cares?” In a world concerned with name recognition, branding and marketing, he proclaimed that it was not important that everyone knew what ERF was, so long as its mission was carried out through low-keyed informal conferences that brought interdisciplinary research and discussion to the forefront.
The 1974 newsletter detailed plans for the 1975 ERF conference in Galveston, Texas, which focused on Estuarine Processes and revealed the role that ERF would play in the upcoming Congressional report on the status of estuaries in the United States. It seems that ERF’s second President and CERF’s current President, Susan Williams, were kindred spirits in that they were keen on interfacing decision makers with the scientific community through the vehicle of C/ERF and “catalyzing national goals and perspectives on significant problems.” Experts from our ranks then began the C/ERF tradition of informing policy decisions through science and innovative thinking.
However, it is possible that our dress code stood in the way of progress in more formal circles. The terms “quirky,” “informal” and “eclectic” are meant as terms of endearment, and can describe the general fashion (yes, we are going there) of a CERF conference in any decade. Upon seeing the masses of CERFers at the Oregon Conference Center during CERF 2009, a non-CERF member commented, “Do you even know you are at a professional conference? Most of you are wearing fleece vests, as if you are about to spring into action; and I am pretty sure a third of you have utility knives on your belts.” Yes, we know we are at a conference.
We are just following tradition. President Jeffries was fond of the informal CERF dress code and the power of sacrificing the professional facade in the name of progress in discovery. In his newsletter article, he recited the advice of one ERF mentor to a new ERF student about to give his first presentation ca. 1973, “Rubber boots are allowed here, but for goodness’ sake, take off that tie!”
Perhaps the most poignant reminder that the coastal problems are the same then and now was the summary of the conference convened by ERF in 1974 for the Bureau of Land Management on Marine Environmental Implications of Offshore Drilling. ERF members at the conference contributed to developing a series of offshore drilling recommendations, ranging from ecological theory to the socio-economic implications of dependency on marine resources. It would be difficult to imagine a contemporary session that would fit in better with the conference theme for 2011 than this.
So it would seem from this article that the problems of estuaries and coasts, past and present, may be similar; and the readiness of CERF to challenge them is an ageless quality. But most importantly, when action strikes, we will be dressed for success. 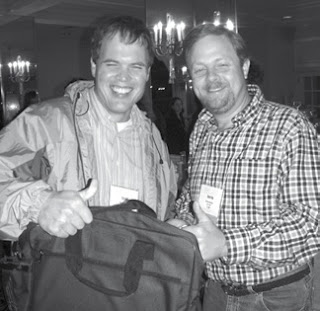 Exhibiting proper attire: Scott Lerberg and
Darrin Dantin leave the ties at home and
gear up for a "double thumbs up" meeting at
ERF2007 in Providence.
Photo Credit: Janet Nestlerode
Posted by Societies, Estuaries and Coasts: Adapting to Change at 4:37 PM 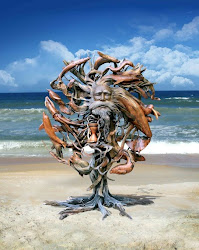